Surgeons reattached a Taiwanese zookeeper's forearm Thursday after a 200-kilogram (440-pound) Nile crocodile chomped it off and colleagues recovered the limb from the reptile's mouth, an official said. 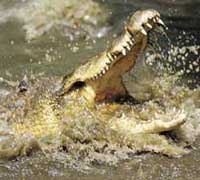 The male crocodile severed Chang Po-yu's forearm on Wednesday at the Shaoshan Zoo in the southern city of Kaohsiung when the veterinarian tried to retrieve a tranquilizer dart from the reptile's hide so he could give it medication, zoo officials said.

The forearm was reattached following seven hours of surgery on Thursday.

The Liberty Times newspaper said Chang failed to notice that the crocodile was not fully anesthetized when he stuck his arm through an iron rail to medicate it.

The 17-year-old reptile is one of a pair of Nile crocodiles kept by the Kaohsiung zoo.

Known as a man-eater because of its voracious nature, the crocodile is listed as an endangered species, and is rapidly disappearing from its native African habitat.

As Chang was rushed to the hospital on Wednesday, a zoo worker shot two bullets at the crocodile's neck to retrieve the forearm, said Chen Po-tsun, a zoo official.

"The crocodile was unharmed as we didn't find any bullet holes on its hide," Chen said. "It probably was shocked and opened its mouth to let go of the limb."

Chen said the zoo purchased the crocodile 10 years ago from a local resident who had kept it as a pet.