Marine sentenced to two years in prison for stealing truck

A Marine who claimed he suffered from traumatic stress being ordered to photograph corpses in Iraq was sentenced to two years in prison for stealing a truck. 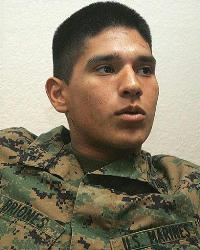 Marine sentenced to two years in prison for stealing truck

Lance Cpl. Roel Ryan Briones, 22, told a Kings County Superior Court judge Monday he is working to get his life together.

"It hit me really hard," Briones said about his time in Iraq. "I've seen some terrible things."

Briones, who pleaded guilty to auto theft last year, was also ordered to go through a substance-abuse treatment program and pay more than $110,000 (Ђ81,930) in restitution, The Fresno Bee reported Wednesday.

Briones was the first member from his unit to speak publicly about the 24 Iraqi civilians allegedly killed by Marines in Haditha in 2005. His family said he suffers from post-traumatic stress disorder after his friend died in Iraq, and being ordered to photograph and help remove the bodies of men, women and children there.

Four Marines have been charged with unpremeditated murder, and four officers are charged with failing to properly report the Haditha killings, the biggest U.S. criminal case involving civilian deaths to come out of the Iraq war.

Attorneys for the Marines have said the troops were responding with legitimate force after a fatal roadside bomb.