Stolen masterpieces "The Scream" and "Madonna" may require treatment

The stolen Edvard Munch masterpieces "The Scream" and "Madonna" may require treatment by an eye surgeon to remove tiny splinters of glass. 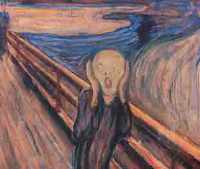 Stolen masterpieces "The Scream" and "Madonna" may require treatment

"That is one of the options under consideration," Lise Mjoes told The Associated Press after testifying at a court hearing in Oslo.

She said an eye surgeon has skills and equipment for the removal of glass fragments without damaging the surrounding area during restoration.

The paintings were recovered by police on Aug. 31, about two years after they were stolen by masked gunmen in a daylight raid at Oslo's Munch Museum. Both were damaged and are being repaired.

Last month, an Oslo appeals court upheld the conviction of three men for taking part in the robbery, and on Wednesday began hearing testimony ahead of their sentencing. The prosecution demanded prison terms ranging from seven to 12 years. Sentencing was expected on April 23.

In her testimony on Wednesday, Mjoes described the damage to the paintings as the result of rough handling by the thieves, and two years of improper storage. She said the damage was the same as previously described by the museum: scrapes, holes, loose paint and moisture damage.

She said because the frames and glass on both works had been broken during the theft, tiny glass fragments were embedded in the paintings, with "Madonna" being especially hard hit.

"We want to get those out to prevent them from causing more damage later," Mjoes told the court, addling that they might ask an eye surgeon to remove the glass.

After the hearing, she told the AP that a painstaking process of assessing the damage to the paintings, and the best approach to repairing them was still underway. Mjoes said no decision had been made on when to start the actual restoration work or how long it would take to complete it.

Although the paintings are broadly considered priceless, prosecutors in the orginal trial had demanded that the robbers pay 750 million kroner (US$123 million,EUR92.5 million) in compensation. That demand was dropped after police recovered the paintings in a secret operation they still refuse to discuss.

"The Scream" and "Madonna" were part of Munch's "Frieze of Life" series, in which sickness, death, anxiety and love are central themes. He died in 1944 at the age of 80.

There are four versions of "The Scream," probably Munch's best-known work, depicting a waif-like figure apparently screaming or hearing a scream.