Two bomb attacks, one targeting the Algerian prime minister's office and the other a police station, killed at least 17 people and injured dozens Wednesday, the official news agency reported. 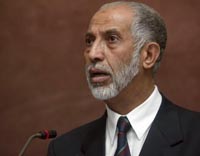 Prime Minister Abdelaziz Belkhadem called the attack a "cowardly, criminal terrorist act" as he spoke to reporters outside his wrecked offices. Parts of six floors of the building were ripped away, and the iron gates outside were bent by the force of the blast.

The attacks were a devastating setback for the North African nation's efforts to put behind it an Islamic insurgency that has killed 200,000 people. After years of relative calm, an al-Qaida affiliate recently has recently waged several smaller attacks.

The prime minister declined to say how many people had been killed or injured. The official APS agency reported that the bombing of the government building killed at least nine people and injured 32, and that eight others were killed and 50 wounded in the attack on the police station of Bab Ezzouar, east of the capital, Algiers, on the road to its airport.

Witnesses said they had seen a red car drive toward the government building, that police opened fire to try to force it to stop, and that the car then exploded. Their accounts could not immediately be officially corroborated.

A charred, wrecked car lay on the pavement about 30 meters (100 feet) from the gates of the building - a modern white, block-like high-rise that also houses the Interior Ministry.

The explosion at about 10:45 local time (0945 GMT) caused windows to rattle at least a kilometer (half a mile) away. Few details were immediately available about the other attack east of the capital.

Algeria's insurgency broke out in 1992, after the army canceled legislative elections that an Islamic party appeared set to win.

Since then, violence related to the insurgency has left an estimated 200,000 dead - civilians, soldiers and Islamic fighters - according to the government. Algeria's military led a crackdown on militants hiding out in the country's brush and mountains, while the government tried to reconcile the nation with several amnesty offers to militants willing to turn in their weapons.

The prime minister expressed bitterness at insurgents who refused the amnesty offers.

"The Algerian people stretched out a hand to them, and they respond with a terrorist act," he said.

Large-scale violence died down in the late 1990s, but skirmishes have surged again in recent months as an al-Qaida affiliate carried out a deadly and carefully planned series of bomb attacks in the North African nation.

A March 3 bombing of a bus carrying workers for a Russian company killed a Russian engineer and three Algerians. A December attack near Algiers and targeting a bus carrying foreign employees of an affiliate of Halliburton killed an Algerian and a Lebanese citizen.

Al-Qaida in Islamic North Africa - the new name for the Salafist Group for Call and Combat, known by its French abbreviation GSPC - claimed responsibility for both attacks.