A high school student passed a handgun to a classmate inside a Chicago classroom Tuesday when it accidentally discharged, striking both in the leg, police said. 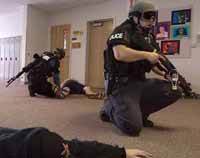 The boy were sitting in the back of a classroom at the Chicago Vocational Career Academy when the accident occurred. One boy was struck in the thigh and the other near the knee, said Robert Lopez, an assistant deputy police superintendent.

The teen who brought the gun to school panicked, ran outside and dumped the gun near the front of the building, Lopez said. A police officer assigned to the school confronted the student as he re-entered, and the student led him to the gun.

Police earlier had said the student had shot a classmate in the leg, with the bullet apparently ricocheting and wounding the shooter.

Lopez said the boys were 15. But police and school reports listed the boy who brought the gun to school as 15 and the other as 14.

"How the weapon got into the building obviously is a main concern for us," Vaughn said, adding that additional security measures would be used to help screen students.

Lopez said there would be charges against the teen who brought the gun to school, but he had no details.

It was the second shooting on school property in less than a month. On March 22, two students standing in the parking lot were shot and wounded after a car pulled in and an occupant opened fire, Bond said.

The students both recovered, but no arrests were made, Bond said.