A 15-year-old boy was sentenced to 45 years in prison  in the killing of a high school official and the wounding of two others. 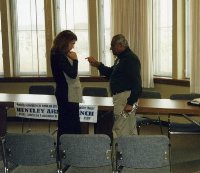 Kenneth Bartley Jr.'s guilty plea was announced after jury selection for his trial had started.

Bartley had been charged with first-degree murder and attempted murder and could have faced more than 50 years in prison if convicted. He lost a bid to have the case handled in juvenile court.

The plea deal was announced after special Judge Jon Kerry Blackwood consulted with defense and prosecution attorneys, the two administrators who survived and the widow of the man who died.

The shooting occurred Nov. 8, 2005, after school officials confronted Bartley, then 14, about a tip that he had a gun in the school. In an office, according to witnesses, Bartley pulled a gun from his pocket, loaded it and fired.

"Kenny stood up with the gun waving it at all of us," Pierce said. "Mr. Seale asked him if it was real. He said, 'Yes, it's real. I'll show you. I never liked you anyway."'