Turkish police detained a man who threatened to blow up a passenger plane. 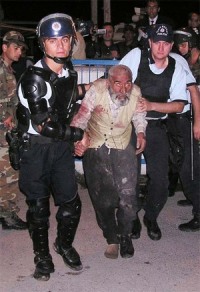 The man claimed to have an explosive device on board the private Pegasus flight that was traveling from the predominantly Kurdish city of Diyarbakir to Istanbul, Transport Minister Binali Yildirim said.

The man, identified as Mehmet Goksin Gol, initially said he wanted the plane diverted to the capital, Ankara, and then changed his mind and demanded that it change its route to Tehran, Iran, Yildirim said. The pilots landed the plane at Ankara's Esenboga airport, where the man gave himself up and was arrested.

The 39-year-old man was not armed and did not have explosives. He had claimed to have an explosive device that he said could be set off with a mobile phone signal, Yildirim said.

Earlier, officials said the man had stormed the cockpit, but Pegasus airline CEO Ali Sabanci said the cockpit was locked in accordance with international flight rules and the man was not able to enter it.

Yildirim said the man had not made any political demands and the reason he wanted to divert the plane was under investigation.

Interior Minister Abdulkadir Aksu told reporters the man stood up during the flight and shouted: "I have a bomb."

The plane, a Boeing 737, left Diyarbakir at 5:40 p.m. (1440GMT). Pilots notified authorities of the attempt to divert the plane half an hour later, the transport minister said.

There were no injuries. There were 178 passengers and six crew on board.

The government-run Anatolia news agency said that in 1994 the man was acquitted on charges of aiding and abetting the separatist Kurdish rebel group, the Kurdistan Workers Party, or PKK. The agency also said the man had been charged for using and selling drugs in the past.

Aksu said police were investigating possible links to the PKK, which has been fighting for autonomy in Turkey's southeast since 1984.

"It is not yet clear if there is any connection to the organization," Aksu said.

Yildirim said there was no security lapses at Diyarbakir airport _ an airfield that is also used by Turkey's air force.

"Our only consolation is that the incident ended without even a nosebleed," Yildirim said.

Firat Keles, a passenger on board, told CNN-Turk television that the man could be seen reading the Quran during the flight.

Pegasus sent another plane to Ankara to fly the passengers to Istanbul.

It was the second hijacking attempt by a Turk claiming to have a bomb in less than a year.

In October, a Turkish army deserter, claiming to have bombs strapped to his body, hijacked a Turkish Airlines plane during a flight from Tirana, Albania, to Istanbul. The hijacker who had no bombs released all passengers unharmed after fighter jets escorted the aircraft to an Italian airport. The man was seeking asylum because he feared persecution in his Muslim homeland after his conversion to Christianity and wanted Pope Benedict XVI's protection.