A witness at the trial testified that the accused raped her four times during the Rwandan genocide in 1994. 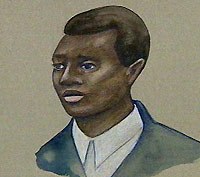 The witness, known as C17 under a court order protecting her identity, is the first person at the trial to testify that she was a direct victim of violence at Desire Munyaneza's hands.

Munyaneza is accused of leading attacks on Tutsis at the National University of Rwanda and south of the capital, Kigali. More than half a million members of the Tutsi ethnic minority and politically moderate Hutus were slain during the genocide.

After several days on the run from one gruesome massacre scene to the next, she was taken with several others to a local government office where they were kept for days, the woman testified. There, the woman said, she was offered up as a gift to Munyaneza by a Hutu militia member.

"He undressed me, made me lie on the ground, and then he had his way," C17 recalled during emotional testimony. "Desire raped me."

The woman added that Munyaneza raped several other women and hacked Tutsi men to death.

Munyaneza is facing seven charges under Canada's new war crimes act, including genocide, crimes against humanity and war crimes. The act allows Ottawa to try suspects within its borders for crimes that occurred abroad.

He has pleaded not guilty to all the charges.

Canada denied Munyaneza, a Hutu, refugee status in September 2000 and he lost several appeals. An Immigration and Refugee Board panel also found there were reasons to believe he had participated in crimes against humanity.

African Rights, a Rwandan group that has documented the genocide, linked Munyaneza to key figures indicted by the U.N. International Criminal Tribunal.

Munyaneza was living in Toronto before he was arrested by the Royal Canadian Mounted Police in October 2005 after reports that he had been seen circulated among Canada's Rwandan community.

Some 12 Rwandan witnesses are expected to testify against Munyaneza in the coming months. Their names have been kept secret.