A U.S. Naval Academy midshipman was found guilty of sexually assaulting a fellow cadet at a hotel last year. The verdict could lead to imprisonment and the man's dismissal from the military academy where the core officers of the U.S. Navy are schooled. 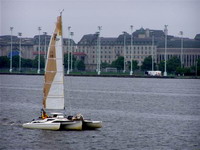 After three hours of deliberation, a jury of seven Navy and Marine Corps officers convicted Kenny Ray Morrison of forcing himself on a female midshipman in February 2006 after a night of drinking. He also was convicted of conduct unbecoming an officer and a gentleman.

He was cleared on charges that he had sex with another midshipman against her will in April 2006.

Morrison, 24, quivered slightly as the verdict was read while he stood at attention behind the defense table, his fists clinched, his chest out. He faces a possible 10-year prison sentence, dismissal from the academy and forfeiture of pay. The military jury reconvenes Tuesday to consider the penalty.

A former backup linebacker on the Navy football team, Morrison is the second Navy football player to be court-martialed in the past year on sexual assault charges.