Ed Belfour, Panthers goalie from Florida, was arrested at a popular South Beach bar after a scuffle with a police officer. 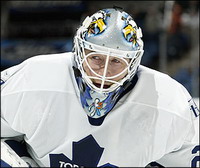 Belfour and Finnish teammate Ville Peltonen were at the bar when security guards from the club asked police to make Belfour leave, police said.

The 41-year-old NHL player refused and walked toward the officer "in a fighting stance" and pushed him, a Miami Beach police report said.

Belfour pulled away from the officer trying to arrest him and grabbed his shirt. Belfour then fell forward on the ground, kicking and refusing to place his hands behind his back, the report said.

Belfour had slurred speech, bloodshot eyes and smelled of alcohol, police said. He was charged with disorderly intoxication and resisting an officer without violence.

Peltonen, 33, was charged with criminal mischief after he broke a metal pole off a fire rescue truck parked in the area, a police report said.