The Greek coast guard investigating the sinking of the Sea Diamond cruise ship questioned island boatsmen about allegations the crew delayed evacuating more than 1,500 people on board. 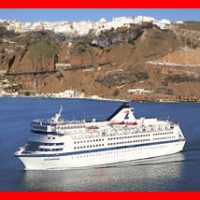 Six crew members of the Greek-flagged Sea Diamond, including the captain and chief mate, have been charged with negligence.

At the site of Thursday's accident, crews worked to contain more than 50 tons of oil spilled since the 143-meter (469-foot) vessel sank, while plans were made to seal off or remove the remaining 400 tons from the hulk, which has settled on an undersea slope. Most of the hull is 100 meters (320 feet) below the surface.

Although the spill appeared to pose no immediate threat to the main beaches on Santorini, one of Greece's most popular holiday destinations, the fate of the remaining oil on board was a concern.

Coast guard divers continued to probe the hull, to prepare for a search scheduled Tuesday by a remote-controlled submersible craft to look for signs of the two missing passengers, Jean-Christophe Allain, 45, and his 16-year-old daughter, Maud, who are believed to have been trapped in a flooded lower cabin. The missing man's wife told authorities she had narrowly escaped from her flooded cabin, near the area where the rocks tore a hole in the side of the ship.

The rest of the passengers, most of them Americans, reached safety after scrambling onto lifeboats, crossing narrow gangways and climbing down rope ladders.

Members of the Santorini boatsmen's association played a key part in the three-hour rescue effort after the ship hit well-marked submerged rocks in fair weather near the holiday island's main port, and were being questioned on Monday by the investigators looking into allegations made about the ships crew.

Rescuers have repeatedly cited delays in their ability to contact the crew of the ship, which is operated by Louis Cruise Lines, part of a Cyprus-based tourism group. Many passengers also complained of being poorly informed by the crew.

"The captain is very experienced and he followed all the necessary procedures correctly," Peroulis said late Sunday.

The engineer said that after the ship hit the rocks, "the engine room flooded and I was called upstairs to prepare the life boats."

A total of 1,156 passengers and 391 crew were traveling on the four-day Aegean Sea cruise, and included groups from Canada, Britain, Spain, France, Australia and the Dominican Republic.