Vandals deflated the tires on all 88 of the district's school buses in Bay City. 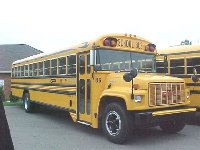 "We're treating this situation very seriously," said schools Superintendent Carolyn Wierda, who canceled classes because of the lack of transportation. "We will proceed in any way possible to take action against whoever is responsible."

The vandals hit sometime over the weekend, district transportation director Michael Gwizdala said. He said there was no evidence of damage to the fence around the bus yard, and the vandals left behind nothing obvious but the flat tires.

"They opened the valves and took the core out," Gwizdala said. "There were no punctures or anything."

Similar bus attacks have forced class cancellations elsewhere in recent months, including several suburban Detroit schools and towns in Ohio and Connecticut. The perpetrators in some of those cases have faced felony charges.

School officials in Bay City expected their buses to be back on the road Tuesday.