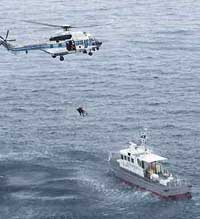 The foreign-registered 6,500-ton cargo ship "Harvest" was traveling from Shanghai to Vietnam when it collided early Sunday with the 17,000-ton Chinese vessel "Jinhaikun" in Taizhou Bay, south of Shanghai, said an official at the news office of the State Administration of Work Safety.

Like many Chinese government officials, he refused to give his name.

He said a search for survivors was under way.

The 19 Chinese and one Indonesian missing in the accident were all on the Harvest, the administration said in a report released via the official Xinhua News Agency.

According to the industry publication Shipping Times, the Harvest was registered in Belize and was carrying 5,000 tons of steel when it sank.