A dispute between friends ended in gunfire inside a car at New York's John F. Kennedy International Airport Friday morning, leaving one man dead and the gunman on the loose. 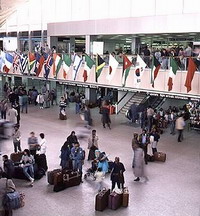 Police said they suspect the dispute was drug-related.

The gunman, wearing dress pants with a shirt and tie, was last seen catching a taxi or livery car outside an airport terminal, said Steve Coleman, a spokesman for the Port Authority of New York and New Jersey, which runs the airport.

According to Coleman, the victim and his girlfriend were giving a friend a ride to JFK to catch a flight to Los Angeles. The woman was driving, and the two men got into an argument on the way, Coleman said.

The gunman shot the victim around 5:30 a.m. (0930 GMT) on a section of expressway within the airport, and then told the woman to drive him to Terminal 7, Coleman said. She did, and the gunman hailed a car and got inside, he said.

The woman then drove to a house in a nearby neighborhood, where someone called city police. The boyfriend was pronounced dead in the car shortly before 6 a.m. (1000 GMT), Coleman said. His body was covered with a sheet in the front passenger seat of the car, parked in the middle of the residential street.

Port Authority police searched the airport for the gunman, who is believed to be in his mid-20s, Coleman said. He was wearing a shirt, tie and dress pants.

The names of the three people were not released. Coleman said he did not know what the two men had argued about.

The shooting did not affect the airport's operations, he said.

It came less than a day after a man breached security at one of the airport's terminals, causing security officials to evacuate parts of two terminals and delaying some flights for hours, according to authorities. Authorities said the two incidents did not appear to be linked.