Somali pirates are demanding US$20,000 (EUR15,000) for the return of an Indian-flagged merchant ship and its crew, officials said. 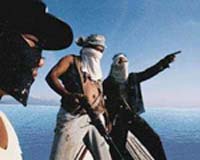 The pirates, armed with assault rifles and rocket-propelled grenades, seized the MV Nimatullah and its 14-member crew off the coast of Mogadishu early Monday.

The pirates originally had demanded US$40,000 (EUR30,000), but scaled down their demand based on their valuation of the ship's cargo, said Andrew Mwangura, head of the Kenyan chapter of the Seafarers Assistance Program.

The British-based International Maritime Bureau warned Wednesday there had been a marked increase in pirate attacks in Somali waters.

"Vessels are advised to steer well clear of Somalian waters at all times and only approach once full clearance to enter the port has been received," the organization said in a statement posted on their web site.

The MV Nimatullah was carrying more than 800 tons (725.7 metric tons) of cargo, including cooking oil, second hand clothing and rice. It is being held at coastal town of Harardheere, a pirate stronghold 400 kilometers (250 miles) north of the capital, Mwangura said.

Mwangura expressed concern over the crew, all of whom are south Asians, and cargo's intended recipients.

The ship's Dubai-based owner, Issa Bhata, could not be reached for comment.

Mwangura added that another ship, MV Nishan, was attacked close to Mogadishu seaport by pirates Tuesday, but managed to escape.

The 1,860-mile (2,993-kilometer) coast of Somalia, which has had no effective government since warlords ousted a dictatorship in 1991 and then turned on each other, has become one of the world's most dangerous areas for ships.

In February, Somali pirates seized a U.N.-chartered vessel that had delivered food aid to northeastern Somalia. The ship and its 12-member crew are still being held.

In 2005, two ships carrying U.N. World Food Program aid were overwhelmed by pirates. The number of overall reported at-sea hijackings that year was 35, compared with two in 2004, according to the International Maritime Bureau. In 2006 there were ten attacks while this year there have been four so far.