A police raid on the Hells Angels has led to 31 arrests and 169 charges related to drugs and weapons in Ontario. 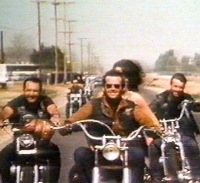 The arrests were made in a series of raids throughout the province Wednesday during a joint operation that also targeted biker clubhouses in the Canadian provinces of New Brunswick and British Columbia.

Ontario Provincial Police Commissioner Julian Fantino said Thursday the arrests send a message to bikers that "they can run, but they can't hide."

"They were exposed by one of their own," Ontario Provincial Police Inspector Dan Redmond said

The raids were sparked by the purchase of cocaine and GHB.

The arrests follow a number of significant moves against biker clubs by authorities in Ontario over the past year.

A series of simultaneous raids launched by provincial police in September 2006 saw 500 officers involved in arresting 15 members of the Hells Angels.