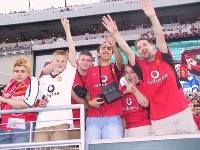 Rome prefect Achille Serra said the two fans were stabbed in the groin or backside during clashes with Roma supporters. A total of 18 fans were reported injured and Serra said at least three were Italian.

Meanwhile, three United fans who were arrested by Italian police in a separate clash during Wednesday's quarterfinal first leg at the Stadio Olimpico will face fast-tracked charges, the British Embassy in Italy said. It was not immediately clear what charges the three Britons will face.

Shortly before halftime, police in riot gear clashed with some of United's 4,500 fans. Police hit fans with batons as opposing fans taunted and threw objects at each other across the partition separating the rival sections. At least one fan was seen lying in the stands with blood all over his face.

Steven Fitzsimons, the fan who was stabbed in the groin, told AP Television News that he and his friends were ambushed by Roma fans outside the stadium and that there were no police around.

"I got hit in the back of the head, I stumbled to the floor," he said "When I got up, we were surrounded by Roma fans all with knives. They just attacked us, stabbed us and that was basically it."

Fitzsimons, who was taken to the San Giacomo hospital, said the police still hadn't interviewed him.

Roma won 2-1. The second leg in Manchester is on Tuesday. UEFA said it will investigate the violence.

Tensions were high after United issued a pre-game warning on its Web site to fans traveling to Rome. It told fans to avoid certain areas of the city and not to use the train system because "there is a real danger of being attacked by the 'Ultra' fans of AS Roma." Rome officials said it would inflame tensions.

Manchester United said Thursday in a statement that it would look into the police clashes with fans.

"There were clearly some very disturbing scenes in the stadium on Wednesday night," the club said on its Web site. "Until we have had chance to discuss the situation with the British Embassy in Rome and the Italian authorities and to understand the cause, it would be inappropriate to comment."