A 40-year-old intern with the National Archives stole 164 Civil War documents - including the War Department's announcement of President Abraham Lincoln's death - and sold most of them on eBay. 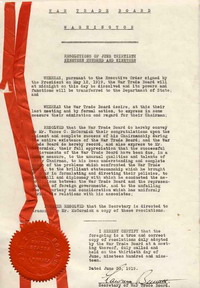 Denning McTague, who worked at a National Archives and Records Administration facility in the city last summer, pleaded guilty to one federal count of stealing government property.

He told investigators that he took the documents out of the building hidden inside a yellow legal pad.

The investigation began in the fall after a Gettysburg company that publishes books on the Civil War recognized the eBay items as National Archives documents and alerted authorities, officials said.

As an intern, McTague was responsible for arranging and organizing documents in preparation for the upcoming 150th anniversary of the Civil War. His responsibilities included ordnance records dating from 1816 to 1907, prosecutors said.