Three holy scrolls were recovered seemingly undamaged from a safe inside the burned-out New York synagogue. 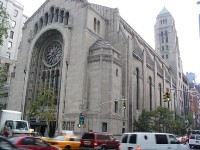 Police say the fire does not appear to be arson. A Neturei Karta leader claimed that the fire was deliberately set because of the group's anti-Israeli views, and said several other holy books were destroyed.

But Detective Sgt. John Lynch said Tuesday, that it appears "more likely than not that the cause was an accident."

Members routinely burn the Israeli flag. They pray for the end of the Jewish state. A few members even traveled to Iran to participate in a Holocaust-denial conference.

The blaze heightened tensions Monday _ as Passover began _ surrounding the group, which locals are not shy about describing with words like "traitor" and "crackpots."

Referring to the burned holy books, Rabbi Yisroel Dovid Weiss, a leader of Neturei Karta said on Monday: "A part of our heart and soul was taken away."

He said critics had threatened, warned and harassed the group in the past. "Those who did this will repent," Weiss said of the fire. "They should turn to the Torah so that we can all have peace."

Authorities were quick to say the fire was suspicious in the hours after the Sunday night blaze, but they backed off Monday afternoon as they got a closer look at the charred house.

"The first sergeant on the scene said we were treating the fire as suspicious," Lynch said. "The truth is we treat all fires that way."

Based on information collected by investigators and an examination of the fire scene by the arson unit and Alcohol, Tobacco and Firearms, the sergeant said there "doesn't appear to be any criminal conduct."

He also said published reports that a gas or electrical problem might have sparked the fire were untrue.

No one was injured in the fire. A senior Neturei Karta rabbi and his family, who lived on the top floor of the three-story, century-old structure, were not home.

The fire gutted the building, and charred prayer books were strewn across the front lawn Monday afternoon. The writing works of the rabbi who lived there were believed to be destroyed.

"They are crazy, but no one should burn down their synagogue," Holocaust survivor Shei Kormblue said as his family members were busy making matzo for Passover. "God will punish whoever needs punishment. It's not up to us."

The Neturei Karta has been the target of threats in the past because of its anti-Zionist stance.

Members oppose Israel because they believe there should not be a Jewish state until the Messiah comes and leads them to the promised land. They do not dispute that the Holocaust took place, but they believe Israelis have used the Holocaust to gain sympathy and advantage.

Neturei Karta members, who wear black hats, coats and long beards according to ultra-Orthodox custom, are often seen heckling marchers in annual Israel Day parades in New York. They have appeared publicly with many critics of Israel, including Nation of Islam leader Louis Farrakhan and Iranian President Mahmoud Ahmadinejad.

It was the trip to Iran late last year by five members of the group that sent the outrage soaring to new levels. Ahmadinejad has called the Holocaust a "myth" and said Israel should be "wiped off the face of the map."

Weiss said the attack on the Monsey synagogue was connected to the group's decision to travel to Iran. "This is all because we wanted to build bridges to tell the Muslims not to hate the Jews," he said.

Still, with a membership estimated to be only in the thousands, the Neturei Karta are generally tolerated or ignored, although they were greeted with a large protest at the Monsey synagogue upon their return from Iran.

"Ninety-five percent of us in the community don't agree with them, but we don't shun them," said David Abromevitz. "We know who they are. They send their kids to our schools and shop in our stores."

Monsey is an ultra-Orthodox community about 35 miles (55 kilometers) north of New York City. The streets are dotted with signs in both Hebrew and English, and businesses with names like "Jerusalem Auto Body" and "Kol Tov Pizzeria" are a frequent sight.

Weiss called it a "tragedy" that so many holy books went up in flames. "A part of our heart and soul was taken away," he said.