A gunman firing on a car killed two agents in Russia's main security service and wounded another in the southern region of Dagestan, the republic's Interior Ministry said Thursday. 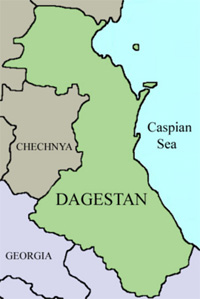 The attack took place late Wednesday in the town of Khasavyurt, near the border with Chechnya, the AP says.

Violence in Dagestan, which is common, is believed to be related to criminal activity and the spillover of unrest in the neighboring republic of Chechnya, where terrorists have been fighting Russian forces for most of the past decade.

In Wednesday's attack, an assailant fired about 10 shots on a car in which agents of the Federal Security Service were riding, the Interior Ministry said in a statement.

Also Wednesday, shots were fired from a passing car at a vehicle transporting soldiers in Chechnya, wounding one serviceman, the Chechen Interior Ministry said.