An 8-year-old Mexican boy who was separated from his mother for months when she was deported after illegally smuggling him into the U.S. for cancer treatment has died. 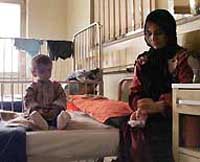 His mother, Guadalupe Carranza, had been deported as an illegal immigrant in 2005 but was permitted to return to the U.S. last year to be with Luis until his death. It was not immediately clear Monday whether she was with her son when he died, officials said.

"Luis was a remarkable boy, and I don't think anybody around here will forget him soon," CPS spokesman Greg Cunningham said. "He showed incredible strength to hang on for so long. That really inspired a lot of people here."

Luis' death came just less than two years after his mother first brought him to Lubbock for treatment. His mother had been bringing him to the West Texas city from El Paso for months when, in late 2005, they became separated.

The Lubbock hospital called Child Protective Services to report medical neglect because his mother was 10 days late in bringing Luis for a chemotherapy treatment. Within a couple of weeks, a judge placed Luis and his two siblings in foster care, allowing their mother to share custody because it was not a typical neglect case.

Carranza left Luis and his two siblings in Lubbock and returned to El Paso to arrange for Luis' brother and sister, unlike Luis both U.S. citizens, to stay with their grandparents.

But Carranza did not return for a court hearing two weeks later, and in October 2005 immigration authorities in El Paso discovered her and sent her back to Mexico.

It was around that time that Luis' treatment pushed his leukemia into remission and doctors grew upbeat. But the chemotherapy and radiation had so weakened his body and suppressed his immune system that Luis began to have seizures. He suffered "terminal and irreversible" brain damage, doctors wrote in court documents.

He lapsed into a vegetative state in early 2006, and his doctors, concluding he had little chance of recovery, insisted on a do-not-resuscitate order, meaning no life-saving measures would be taken. His mother tried to sneak across the border but was again caught and sent back to Mexico, officials said.

Attorneys for the children and the mother, CPS, and even the judge, contacted U.S. border officials, Mexican authorities and even members of Congress to try to bring Carranza to her son's side.

In April 2006, Luis contracted pneumonia and was taken to a Lubbock hospital, where he was not expected to survive. Later that month, the office of U.S. Sen. Kay Bailey Hutchison intervened and Carranza was allowed to cross the border.

An attorney in the case said that despite Luis' condition, he seemed to sense his mother presence. His condition improved and CPS approved his returning to El Paso with his mother. U.S. officials, who initially gave Carranza a humanitarian visa, agreed to let her stay until Luis died, reports AP.

Luis was at his grandparents' home when he died, Cunningham said.

"We all knew he was suffering and we're all confident that he's gone to a better place," he said.