An outbreak of contagious diseases at a shelter where officials admit they kept animals for too long without destroying them has forced the killing of about 1,000 dogs and cats, officials said. 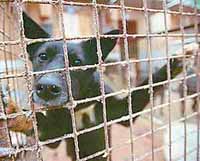 Visiting inspectors from The Humane Society of the United States discovered the outbreak of the diseases distemper and Parvovirus in dogs and panleukopenia in cats Lied Animal Shelter spokesman Mark Fierro said.

The mass culling, which began Feb. 9, is believed to be the largest in the city's history and has prompted shelter officials to change their methods of caring for animals.

Animal rights activists said they were outraged by the killings.

"It's unforgivable in light of the fact that it was absolutely preventable," said Holly Stoberski, legal counsel for Heaven Can Wait Sanctuary, a group that has worked with Lied to find homes for impounded animals. "They were not properly vaccinating the dogs and cats in a timely manner."

Shelter officials vowed to adopt new policies when it reopens Friday, including euthanizing animals after 72 hours at the shelter as the Humane Society recommends and improving conditions for the animals, including vaccinating them when they arrive.

Not all of the 1,000 animals were infected. Some were put down because they had gone unadopted for more than 120 days and were contributing to overcrowding that Humane Society officials said helped spread the diseases, reports AP.

Lied officials have said they did not realize animals were infected until the Humane Society team noticed animals with intestinal and respiratory problems.

The foundation contracts with Clark County and the cities of Las Vegas and North Las Vegas to handle abandoned, neglected and stray animals at Lied. Last year, more than 12,600 animals were adopted out by the shelter, while more than 24,200 were euthanized because of medical or behavioral problems or other reasons.