A man who raced into a burning home to rescue relatives died with three young children after he pulled one toddler from the flames and went back inside, authorities and family members said. 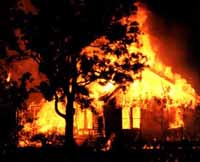 Elisha Davis, 26, was found dead with a child under his arm near the back door, which had been nailed shut to deter criminals, relatives said.

"He burned up with the babies," said his aunt, Mary Bowers. "He died trying to save those babies."

Two young girls and a young boy were killed in Sunday's blaze, while their grandfather and his common-law wife were hospitalized in a burn unit, officials said.

Davis was in a small camper trailer nearby when he heard the fire and ran to rescue his family from the wood-frame house in Fresno,Texas, a rural area about 16 miles (25 kilometers) southwest of Houston. Davis rescued his 2-year-old cousin, officials said.

Investigators suspect the fire was accidental and may have started in the living room area, where the children were sleeping, said Terriann Carlson, a Fort Bend County sheriff's spokeswoman, reports AP.

A neighbor said the children lived with their parents in Houston and were visiting their grandfather.