Mortar attacks in Somalia's capital killed at least seven people and injured 20 in the worst night of violence since the government took control, a nurse and residents said Friday. 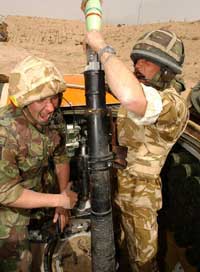 Late night attacks occurred on Mogadishu's seaport, a hotel and an Ethiopian military base, whose troops have provided crucial support to the government in ousting an Islamic movement. The Islamic group have vowed to wage an Iraq-style insurgency.

Deputy Defense Minister Salad Ali Jelle blamed the attacks on hardline remnants of the Islamic group, insisting his interim government is in control.

"We have suspects and we know the areas where they plan their attacks," he told The Associated Press by telephone. "We will punish them."

But the escalating violence in Mogadishu, a city of more than 2 million people, is likely to delay the planned deployment of African peacekeepers who are supposed to fill the void left by departing Ethiopian forces and help the government maintain its tenuous grip on power.

"We were sleeping when two mortars hit our house here," Barlin Muse Dhere, told the AP. Four people were killed, she said. Ahmed Abdi, a nurse at a hospital in the north of the city, said six people were admitted and two died of their wounds.

Another person died when shells hit a hotel, witnesses said.

Earlier Thursday, hundreds of supporters of Somalia's ousted Islamic group demonstrated in the capital against an imminent deployment of foreign peacekeepers.

The protesters chanted anti-government slogans and burned tires, a day after the African Union said three battalions of peacekeepers from Uganda and Nigeria were ready to be deployed in Somalia and would be airlifted in as soon as possible.

The protesters called for the return of the Islamic movement, which was credited with restoring some order in the violent nation.

Factional violence has again become a feature of life in Mogadishu since last month when Somali government troops with crucial support from Ethiopian soldiers, tanks and war planes ousted the Islamic movement.

Ethiopia, whose continued presence is deeply unpopular among Somalis, says it does not have the resources to stay and already has begun withdrawing, presenting the possibility of a dangerous power vacuum.

The African Union was pressing ahead with its peacekeeping mission to Somalia despite securing only half the 8,000 troops needed at a key summit of African leaders that ended Tuesday. Five nations Uganda, Nigeria, Malawi, Burundi and Ghana have pledged around 4,000 troops so far.

Somalis are wary of a foreign peacekeeping force following the disastrous U.N. intervention in the early 1990s, a bloody period even by Somali's turbulent history.

On Tuesday, extremists in Somalia said they would try to kill any peacekeepers.

The United States has accused the Council of Islamic Courts of sheltering suspects in the 1998 al-Qaida bombings of U.S. embassies in Kenya and Tanzania. Osama Bin Laden has said Somalia is a battleground in his war on the West. The U.S. launched two airstrikes against fleeing Islamic fighters, although details of the attacks are unknown, reports AP.

Somalia has not had an effective national government since 1991, when warlords overthrew dictator Mohamed Siad Barre and then turned on one another, throwing the country into anarchy.

The transitional government was formed in 2004 with U.N. help.