Soldiers responsible for majority of political killings in Philippines

Philippine soldiers are responsible for killing many of the left-wing activists gunned down since 2001, a newspaper reported Tuesday, citing the head of a fact-finding commission. 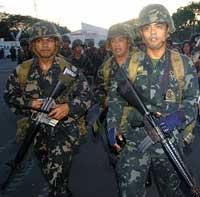 Soldiers responsible for majority of political killings in Philippines

However, a retired army general named in the news report called the allegations "communist propaganda" and denied any responsibility.

"Some of the killings were attributed to politicians, some to the security guards of landlords, but (the) majority of the killings pointed to these military elements," former Supreme Court Justice Jose Melo told the Philippine Daily Inquirer.

President Gloria Macapagal Arroyo, who formed the commission in August amid near-weekly killings of left-wing party members and activists, received the commission's report later Tuesday but did not disclose its contents.

"I deplore the killings, be they from left or right, against journalists or activists," she said in a statement. "We have a sorry history in our nation of political violence. I aim to stop it once and for all."

Melo refused to give details of the report until Arroyo authorizes its release.

The Philippine human rights group Karapatan has listed more than 800 people allegedly gunned down by security forces since 2001. It was unclear how many of those had been investigated by the Melo Commission.

Commission members "don't want to tag the whole military establishment, only elements of the military who were allowed to do their thing without supervision from higher officers," Melo was quoted as saying.

According to the Inquirer, Melo named retired Maj. Gen. Jovito Palparan, described by Karapatan as a "butcher" and "executioner," as one of the commanders who could be held responsible.

"If they could specify that it is my men killing people, then perhaps it is my responsibility," he told The Associated Press. "But have they identified any of my men who have done these killings, and then was it my order or command policy to kill them?"

"In my view, these allegations have been derived from the accusations of the militants, who are connected with the enemies the NPA (New People's Army), with the communists which is therefore a propaganda," he said.

The military, which has been fighting communist rebels for 39 years, often refers to left-wing activists as rebel supporters.

"Why is it that after Palparan retired, the killings continued? This only shows that the killings go beyond Palparan. We have repeatedly said that there is a national policy involved, which sanctions the assassination of activists," Bayan secretary-general Renato Reyes said in a statement.

Arroyo said she has asked Melo to "examine the situation and make recommendations," and to submit supplemental reports from time to time.

She also directed the Department of National Defense and the military to submit an "updated document" on command responsibility, apparently in a bid to determine the extent of a commander's liability for his troops' actions.

The Justice Department was told to broaden and enhance its witness protection program to cover all "unexplained killings of an ideological/political nature." Arroyo also said she will ask the Supreme Court to create special courts to try such cases.

Her government also plans to ask the European Union, Spain, Finland and Sweden which have raised concerns about the killings to send investigators to assist the commission.