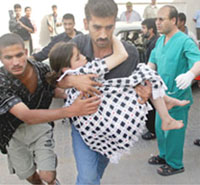 Aramin was hit in the head and critically wounded by a stun grenade thrown by Israeli security personnel during a demonstration against Israel's separation barrier in the West Bank town of Anata, near Jerusalem, on Tuesday.

Her father, Bassam Aramin, 37, was among the founders of Combatants for Peace, a group of former Israeli and Palestinian fighters who work for a peaceful solution to the conflict. The family was unavailable for comment, reports AP.