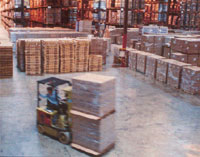 Police said they believed the bodies were those of four children who disappeared in November.

The discovery late Tuesday comes amid a national outcry over the killings of 17 women and children whose skulls and other body parts were found in storm drains in an affluent New Delhi suburb nearly two weeks ago.

Nearly all the victims came from families of poor migrant workers living in a nearby slum. Their relatives have complained that police repeatedly ignored their complaints that people were vanishing.

On Tuesday, the smell of the half-burned bodies of two boys and two girls led police to the warehouse on the outskirts of Muktsar, a town some 190 kilometers (120 miles) southwest of Amritsar, the main city in Punjab, said V. K. Bhawra, an inspector-general of police, reports AP.

The warehouse belonged to Jagmeet Singh Brar, a former lawmaker from the ruling Congress party.

He denied having any knowledge of a crime being committed in connection with the discovery. He said he rented out the property some 15 years ago and it has remained shut for the past five year because of a slump in business, the Press Trust of India news agency quoted Brar as saying.