French police captured a bank robber who had been on the run for more than 20 years following one of the country's biggest-ever heists, police said Tuesday. 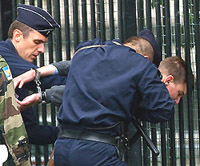 Police arrested 48-year-old Miloud Hai on Dec. 22 on the northern edge of Paris, where he lived, police said. For years, he had escaped capture by changing homes often and waking in the early hours, when the police typically raid the homes of sleeping criminals, officials said.

Hai, an Algerian national, had been convicted in absentia and sentenced to life in prison for his role in a 1986 holdup at the Banque de France in the western city of Saint-Nazaire.

The hunt for Hai intensified this year. Police suspect him in a new holdup in April in the chic Paris suburb of Neuilly-sur-Seine, reports AP.

In that attack, four masked assailants forced a real estate agent to open his safe at gunpoint and hand over Ђ15,000 (US$19,800) in cash, as well as jewelry and expensive video equipment.

The ensuing investigation focused in on three members of the same family. As police prepared to arrest them, authorities realized the three were all related to Hai.