A Japanese court on Tuesday found a kidney patient guilty of illegally purchasing the organ for a transplant and ordered him to a suspended prison term in the first conviction under a Japanese organ transplant law, a court official said. 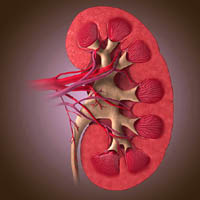 Suzuo Yamashita, 59, was sentenced to one year in prison, suspended for three years, for buying a kidney for a transplant for himself by violating the organ transplant law, said Takaki Matsui, spokesman for the Matsuyama District Court in southwestern Japan.

He said it was the first conviction in Japan under the 1997 law that bans the sale of organs for transplants. The court also sentenced his 60-year-old partner to a suspended one-year prison term for brokering the deal, Matsui said.

Yamashita, who suffers from diabetes, underwent an organ transplant surgery in September after a 59-year-old female agreed to donate her kidney.

The donor, whose name was not released by police, had been separately fined 1 million yen (US$8,400; €6,367) for illegally selling her organ, the official said.

Judge Kenta Fukui said the recipient's desperation for an organ was understandable but was clearly illegal, Kyodo News agency said. He also called the crime "inevitable" and urged the government to set up stricter guidelines to prevent a recurrence of similar crimes.

In a separate case also in Uwajima, a surgeon recently became under fire after conducting a series of transplants using organs removed from patients of cancer and other illnesses.