A man has been taken to a hospital after tangling with a venomous fish in his home aquarium, police said. 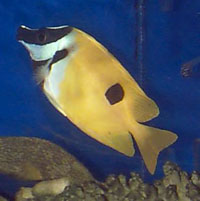 A one spot foxface rabbitfish bit the 19-year-old aquarist Tuesday night while he was working on his fish tank, said Nassau County Police Officer Thomas Brussell.

The species, known by the scientific name Siganus unimaculatus, has venomous spines on its back, according to fishbase.org, an electronic database maintained by researchers. Also called the blotched foxface rabbitfish, the fish is found in tropical seas off western Australia, the Philippines and other parts of the western Pacific Ocean.

Brussell said firefighters took the young man to a local hospital with a bite to his left index finger around 9:25 p.m., but information on his injuries and condition was not available early Wednesday, reports AP.

Police would not release the man's name.