Britain's government on Monday expressed its opposition to a death sentence handed down to a British citizen by a Vietnamese court over the weekend. 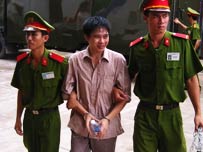 The court in central Quang Binh province on Saturday sentenced three Vietnamese citizens and Le Manh Luong, a British national of Vietnamese origin, to death by firing squad, after convicting them of drug trafficking.

At the end of the five-day trial, a second British citizen of Vietnamese origin, Tran Thi Hien, received a life sentence. Three other Vietnamese nationals received jail terms of 15 months to 23 years.

The eight defendants were convicted of smuggling 339 kilograms (746 pounds) of heroin from Laos through Vietnam to Hong Kong and mainland China.

The two British citizens were arrested in June 2004 when police found 70 kilograms (154 pounds) of heroin hidden in their two trucks.

"The U.K. is resolutely opposed to the use of the death penalty. Our prime concern is to avoid the execution of British nationals," said Rebecca Cousins, a British Embassy spokeswoman.

She said that the trial was consistent with requirements under Vietnamese law, but that Britain opposes capital punishment, reports AP.

"We will make representations against the use of the death penalty on a British national at whatever stage and level is judged appropriate," she said.

The two Britons have 15 days to appeal.

In Vietnam, possession, trading or trafficking of more than 600 grams (1.3 pounds) of heroin or 20 kilograms (44 pounds) of opium is punishable by death.

Each year about 100 people are sentenced to death in Vietnam, many of them for drug-related offenses.