A Marine accused of killing his newborn son after his wife died of childbirth complications was charged four days after the 3-month-old's death. 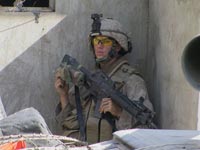 He is accused of beating his son, Roman Quiroz, to death.

Quiroz was jailed Monday and is being held at the Fresno County Jail in lieu of $1 million (Ђ780,000) bail. He was scheduled to be arraigned Monday morning.

Authorities have not disclosed a motive for the slaying, but Quiroz told a TV station in September that he felt overwhelmed as a single parent of two and struggled to accept his son.

In August, Quiroz deployed to a training camp in Kuwait with the Ninth Communication Battalion from Camp Pendleton. He was called home three days later with the news that his wife had given birth to a boy, but had suffered an aneurysm after breast feeding the child.

Quiroz arrived in Fresno faced with ending her life support and assuming sole responsibility for their two children, reports AP.

A state agency also is looking into whether Fresno County social workers failed to investigate if abuse was happening after the infant suffered a broken arm in October.