A father slashed his 12-year-old autistic son's throat, then left the body in a bathtub, police said Friday. 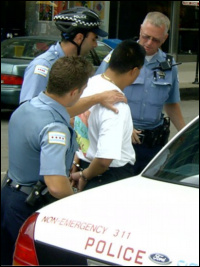 The father, Jose Stable, reported the slaying of his son Ulysses at about 6:30 a.m. Wednesday in their apartment in the city's Bronx borough, said Police Commissioner Raymond Kelly. Stable was arrested on second-degree murder and weapons charges.

When police arrived, Stable, 50, "made statements to effect that, 'I have terminated the life of my autistic child,"' Kelly said.

Stable was in custody of police, who did not know whether he had a lawyer.

The father had taken custody of the boy when he was 2, and the mother lived elsewhere, police said. Neighbors' statements have also indicated the boy had autism.

A city child welfare agency said it had been working with the family after reports the child was not attending school regularly.

Neighbors said there were no signs of abuse, reports AP.

"I've never seen him abuse the kid; he was real protective toward the kid," said Russell Lewis.