Danger to homes eases slightly as wildfires rage near Sydney

Hundreds of firefighters battled wildfires across southeastern Australia on Wednesday as high temperatures and strong winds fanned grass and forest fires into infernos. 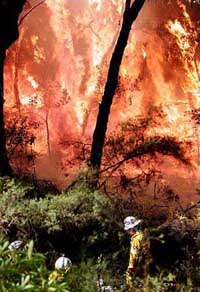 Danger to homes eases slightly as wildfires rage near Sydney

No houses were destroyed, though fires came within a few hundred yards (meters) of homes, the fire service said.

One man died when he accidentally set fire to dry grass Tuesday while tending a beehive with a smoke machine and became entangled in a fence, but his death was not related to the wildfires, New South Wales Rural Fire Service commissioner Phil Koperberg said.

Scores of fires were burning across the states of NSW, Victoria and South Australia as hot dry weather made conditions conducive for brush fires, a common annual occurrence in Australia between November and February.

At the height of the danger Wednesday, more than 200 firefighters were deployed to reinforce hundreds already spread throughout the Blue Mountains while helicopters dumped payloads of water on the fires.

The fires burned mostly in areas inaccessible to fire trucks, leaving firefighters to take containment measures and setting up to protect homes, but unable to battle the fires head-on, reports AP.

Weather forecasters said the hot conditions would continue until next week, and Koperberg said the situation would remain dangerous.

"The next two to three weeks are going to be fairly intensive in terms of attempting to contain these fires," he said.