City officials on Monday were investigating reports that a Kenyan diplomat assaulted his 9-year-old son at the family's home. 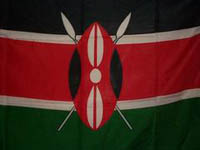 The Administration for Children's Services, a child welfare agency, took temporary custody of the diplomat's son and a daughter pending the outcome of an investigation, City Hall spokesman Jason Post said. He denied reports that the city was seeking a waiver of diplomatic immunity so authorities could charge the father.

At a meeting on Monday, the family, the city and Kenyan officials agreed "to continue to work to ensure the safety and well-being of the children," Post said.

The diplomat, Fred Matwanga, 38, was taken into police custody on Saturday by officers responding to reports that he had assaulted his son, police department spokesman Paul Browne said. He was released after police discovered he had a U.S. Department of State-issued credential identifying him as a diplomat, reports AP.

An ACS spokeswoman, Sharman Stein, refused to discuss the case.

A woman who answered the telephone at the Kenyan mission to the United Nations on Monday said Matwanga was not at work. A home telephone listed for a Fred Matwanga in New York City rang unanswered.