Police searched for clues Wednesday in the fatal shooting of University of Miami football player Bryan Pata, the latest shock to a Hurricanes team touched by tragedy and turmoil. 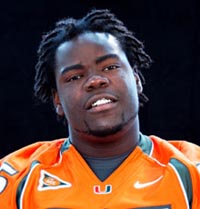 Pata, a popular figure on campus, practiced Tuesday afternoon and was shot Tuesday night at his apartment complex. It was the latest shock to a Hurricanes team touched by tragedy and turmoil, including a separate gun case this season and a wild on-field brawl last month.

The 22-year-old lineman who grew up in Miami was pronounced dead in the parking lot outside his apartment. His death was ruled a homicide, Miami-Dade police spokesman Roy Rutland said.

"My son had a problem with nobody," a tearful Pata told WTVJ-TV in Miami. "He's gone. He's gone."

Word of Pata's death spread quickly around campus, and grief counselors were summoned for his teammates. Another team meeting to discuss a memorial was scheduled for Wednesday, and no decision had been made about the status of Saturday afternoon's game against No. 23 Maryland.

"We're trying to get through a hard time right now and it's going to take time," Miami quarterback Kirby Freeman told The Associated Press after a team meeting at the university's athletic complex. "And that's what being a close football family is all about. We're going to help each other with this."

School officials said coach Larry Coker was "numb" over the news. The athletic department released a statement urging anyone with information about Pata's death to call police.

"Bryan was a fine person and a great competitor. He will be forever missed by his coaches and teammates. We offer our thoughts and prayers to his family," the university said in a statement.

Rutland said police were called at 7:30 p.m. to the scene and found Pata's body. He lived about 6 1/2 kilometers (4 miles) from campus. No motive was released, and Miami-Dade police did not say who made the 911 call after the shooting.

"Right now, we're just gathering ourselves and just trying to pull ourselves together," athletic director Paul Dee told the AP.

Pata was in his fourth year with the Hurricanes and was expected to be selected in next spring's NFL draft. He appeared in 41 games, making 23 starts. Pata played primarily defensive tackle this season, totaling 13 tackles and two sacks.

This was at least the fourth time that tragedy involving a player has struck the Hurricanes in recent years.

In April 1996, Marlin Barnes was murdered in a campus apartment. And in 2003, former Miami player Al Blades was killed in a car accident, about a year after Chris Campbell also died in a crash, reports AP.

In July, Willie Cooper was shot in the buttocks when confronted in his yard before morning workout. Cooper was not seriously injured. Brandon Meriweather, one of Cooper's teammates and roommates, returned fire at Cooper's assailant, taking three shots that apparently missed, police said.

Last month, Miami brawled on the field with Florida International, a melee where fists, feet and helmets became weapons. In all, 31 players were punished, including 13 Hurricanes.