Former dictator Suharto's youngest son, who has served four years in prison for ordering the murder of a judge, was set to be released Monday in a move critics said highlights the ability of Indonesia's rich and powerful to evade justice. 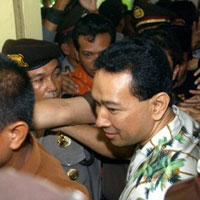 Hutomo "Tommy" Mandalaputra's original 15-year sentence was reduced to 10 years on appeal. Following several lengthy remissions for good behavior, he has now served two-thirds of his sentence, making him eligible for release on parole, a justice ministry official said.

He was scheduled to go next to the prosecutor's office, where his release would be made official, but television crews and journalists prevented his luxury black Toyota from leaving the prison grounds.