Police have detained three Ukrainians on suspicion of carrying out the murder of a top Central Bank official, and have narrowed their search for those who ordered the apparent contract killing, the Kommersant daily reported on Monday. 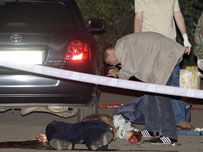 The newspaper, citing sources close to the investigation, said that police were focusing on a number of banks which had come under threat of losing their licenses about two months before bank first deputy chairman Andrei Kozlov was shot dead.

The Sept. 13 murder of Kozlov, who was shot point-blank in the head, is widely believed to be connected to his campaign against money-laundering and criminality in the banking sector.

The suspects, Alexei Polovinkin, Maxim Proglyad and Alexander Belokopytov, were detained last week and are cooperating with the investigation, Kommersant said.

The Ukrainian Interior Ministry has no information on Ukrainians being detained, spokeswoman Olena Titorchuk said Monday.

The first two suspects allegedly shot dead Kozlov and his driver and the third allegedly helped them to escape, the Kommersant report said.

The detained Ukrainians have revealed that they received their instructions from a go-between, according to Kommersant.

The Russian Prosecutor General's Office said it had no comment on the report and declined to confirm that any suspects had been taken into custody.

Responsible for banking supervision, Kozlov had withdrawn the licenses of dozens of banks and had overseen an ambitious scheme to reduce criminality and money laundering in the banking system. Since mid-1994, the Central Bank has shut down some 90 credit institutions, according to Russian media.

While on a lesser scale than in the turbulent 1990s, contract killings of businessmen and bankers still occur regularly in Russia, where business conflicts often turn violent and the government is seeking closer control over economic activity. The murders are almost never solved, reports AP.