Tropical Storm Florence is swirling above the Atlantic Ocean . Officials in Bermuda prepare to issue a warning during the next 24 hours 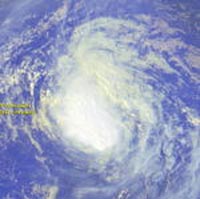 The storm's forecast path puts it over the Bermuda area Monday or Tuesday. Forecasters at the National Hurricane Center said it still posed no danger to the U.S.

"There is no immediate threat to the U.S. If the storm follows the forecast track it will recurve well off the U.S. east coast and there will be no direct impact," National Hurricane Center forecaster Jack Beven said.

Florence was expected to start veering away from the U.S. coast in about two days, he said.

Though still relatively weak with maximum sustained winds near 50 mph (85 kph), Florence is great in size, with tropical storm force winds extending up to 405 miles (652 kilometers) from its center. Forecasters said that could create high surf and rip currents along the U.S. east coast within the next five days.

"People should be taking this seriously," said Dr. Lou McNally, of Bermuda Weather Service. "We don't know exactly how strong it's going to get but this is something to which people should pay close attention. Preparations should be well under way."

Florence developed in the peak of hurricane season in warm Atlantic waters, the source of energy for storm development this time of year. While warm enough to spur storm intensification, forecasters said those waters are not as warm as last year's storm season, which had a record 28 named storms and 15 hurricanes, including Katrina.

The 2006 Atlantic hurricane season has not been as rough as initially feared. The National Hurricane Center lowered its forecast in August to between 12 and 15 named storms and seven to nine hurricanes.