Police searched the house where Natascha Kampusch was held captive for 8 1/2 years and announced an unusual discovery on Tuesday: her captor, a communications technician, used an obsolete computer - and his odd choice now threatens to complicate their investigation, AP reports. 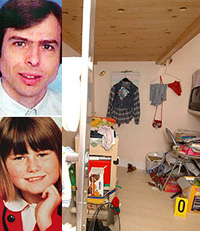 Maj. Gen. Gerhard Lang of the Federal Criminal Investigations Bureau said kidnapper Wolfgang Priklopil, who killed himself by jumping in front of a train within hours of Kampusch's escape on Aug. 23, relied exclusively on a Commodore 64 computer - a model popular in the 1980s but now considered an antique.

Lang told reporters the outmoded computer would complicate investigators' efforts to transfer files for closer examination later, saying it would be difficult "to transmit the data to a modern computer without loss."

Police have been digging pits and using long probes to poke around the property in suburban Strasshof, just northeast of Vienna, to ensure the house and garden do not conceal any other secret underground cells like the one beneath the garage where Kampusch often was confined.

So far, none has been found, Lang said, adding that there were no plans to further question Kampusch about her ordeal.

Kampusch's media representative said the 18-year-old has agreed to a televised interview this week, giving Austrians their first glimpse of the young woman whose nightmare has fascinated the nation.

Public broadcaster ORF will air its interview on Wednesday evening, although Kampusch will be "shielded" in some way to ensure she is not recognizable on the street, said her media adviser, Dieter Ecker.

Kampusch has been besieged by hundreds of requests for interviews since she bolted to freedom two weeks ago, but so far she has agreed to grant only three: the one to ORF, another to the mass-circulation daily Kronen Zeitung, and a third to the weekly magazine News, Ecker said Monday.

"For Natascha Kampusch, it was natural that the Austrian people - who have feared for her life for eight years and have celebrated her escape - should get the details first," he said.

Media experts predicted record ratings. But ordinary Austrians hoping for a glimpse of Kampusch were likely to be disappointed: Organizers said she would appear on TV behind a screen in silhouette or, at most, in camera angles taken from behind or over her shoulder to respect her privacy.

So far, a public hungry for details has been shown only photos taken before her kidnapping at age 10 in March 1998, or computer-generated likenesses of what she supposedly looks like now.

ORF said it would not ask Kampusch any "intimate" questions, steering clear of questions about whether her captor sexually abused her.

Investigators are still piecing together the circumstances surrounding Kampusch's kidnapping and how she survived her ordeal, which it appears she spent for the most part in the tiny cell Priklopil, 44, built for her in the dingy, windowless basement of his home.