Dramatic videotape of "Crocodile Hunter" Steve Irwin's last moments shows him pulling from his chest the poisonous stingray barb that killed him, officials said Tuesday, as tributes poured in for the beloved naturalist famed for getting dangerously close to deadly beasts. 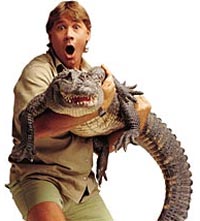 Police said there were no suspicious circumstances in the death of Irwin, who was stabbed in the chest on Monday while snorkeling with a stingray while filming a television program on Australia's Great Barrier Reef, and no evidence he provoked the animal.

John Stainton, Irwin's manager who was among the television crew on the reef, said the fatal blow that struck the presenter and conservationist was caught on videotape, and described viewing the footage as having the "terrible" experience of watching a friend die.

"It shows that Steve came over the top of the ray and the tail came up, and spiked him here (in the chest), and he pulled it out and the next minute he's gone," Stainton told reporters in Cairns, where Irwin's body was taken for an autopsy.

The tape of the death of the man known by TV audiences worldwide for his infectious enthusiasm in the series "The Crocodile Hunter" was secured by Queensland state police as evidence for a coroner's inquiry - a standard procedure in high-profile deaths or those caused by other than natural causes.

Irwin, 44, was shooting footage for a project he was making with daughter Bindi, 8, for airing next year in the United States when he was fatally stung off the north Queensland coast.

On Tuesday, his body was being returned to the Sunshine Coast, where his American wife Terri, Bindi and their son, Bob, almost 3, were keeping a low profile at their home near Australia Zoo, Irwin's wildlife park. No funeral plans were announced, though Queensland Premier Pete Beattie said he would get a state funeral if the family agreed to it.

Australia's Parliament interrupted its normal scheduled so leaders could pay tribute to Irwin.

"He was a genuine, one-off, remarkable Australian individual and I am distressed at his death," Prime Minister John Howard said.

"He was not only a great Aussie bloke, he was determined to instill his passion for the environment and its inhabitants in everybody he met," Opposition leader Kim Beazley said.

Australia Zoo was open Tuesday - staff said it was what he would've wanted - but the mood was somber and most visitors were to a makeshift shrine of bouquets and handwritten condolence messages that emerged at the gate.

"Mate, you made the world a better place," read one poster left at the gate. "Steve, our hero, our legend, our wildlife warrior," read another. Khaki shirts - a trademark of Irwin - were laid out for people to sign.

Stingray experts have speculated that the animal that killed Irwin - who rose to fame by getting dangerously close to crocodiles, snakes and other beasts - probably felt trapped between the cameraman and the television star.

Queensland Police Superintendent Michael Keating said there was no evidence Irwin threatened or intimidated the stingray, a normally placid species that only deploys its poisonous tail spines as a defense.

Stainton said Irwin was in his element in bushland, but the sea posed threats the star wasn't used to.

"If ever he was going to go, we always said it was going to be the ocean," Stainton said. "On land he was agile, quick-thinking, quick-moving and the ocean puts another element there that you have no control over."

Irwin was propelled to global fame after his TV shows were shown around world on the Discovery Channel, which announced plans for a marathon screening of Irwin's work and a wildlife fund in his name.

Experts differed on the number of human deaths caused by stingrays - from up to 17 to just 3 - though they agreed that they were extremely rare.

Australian news Web sites reported being choked by heavy traffic seeking new on Irwin, newspapers devoted their front and several inside pages to the story and some of Irwin's high-profile friends expressed their sadness, the AP reports.

"He was and remains the ultimate wildlife warrior," said Oscar-winner Russell Crowe, who appeared with Irwin recently on "The Tonight Show with Jay Leno." "He touched my heart, I believed in him, I'll miss him. I loved him and I'll be there for his family," Crowe said in New York, Australian media reported.