Suspect John Mark Karr is anxious to travel to Colorado to face the allegations against him in the slaying of 6-year-old JonBenet Ramsey, an attorney for Karr says. 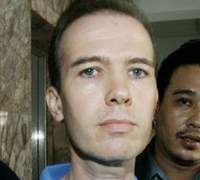 Authorities, however, have been tightlipped about when he will be transferred.

Karr agreed Tuesday to go to Colorado without a fight about extradition. In a two-minute court appearance he was impassive, and his expression changed only once when he slowly closed his eyes as the judge recited the count of first-degree murder that Boulder, Colorado prosecutors included in an arrest warrant.

Jamie Harmon, an attorney who represented Karr when he was charged in 2001 with possessing child pornography in Northern California, commented about Karr's willingness to return and face questioning and possible charges.

"He wants to go now," said Harmon, who attended Tuesday's hearing. "Mr. Karr has been portrayed by the media as of late as being mentally unstable, attention-seeking, unwell, mentally unwell. And he is none of those things. He is anxious to have an opportunity to address the allegations against him, to be portrayed in a more accurate and complete way."

The attorney, who said she and her partner, Patience Van Zandt, would be advising Karr in some capacity, said Karr was "not subject to ready categorization or easy answers."

Harmon described Karr as intelligent and unusual, saying he "marches to the beat of a different drummer."

"He is a different sort of person than most of us walking around on the face of the planet, and that differentness has been construed in the media as wrong or somehow unbalanced," she said. "And I don't find that to be true at all. I found him to be very engaging, very bright, very articulate and very, very much appropriate in his emotional response to what is going on."

With the order from Superior Court Judge Luis Lavin, Karr was available to be picked up by Boulder authorities at any time.

Karr, who had been photographed in Thailand and on his trip to the United States wearing civilian clothes, appeared in court wearing an orange jail jumpsuit, his hands cuffed to a chain around his waist.

His attorney for the hearing, Deputy Public Defender Haydeh Takasugi, said Karr was concerned about appearing in jail attire rather than civilian clothes.

"It's going to taint any potential jury pool out there," Takasugi said. "He was upset at that."

Boulder prosecutors have not disclosed their evidence against Karr in the Christmas 1996 killing of the beauty pageant princess. The crimes stated in the arrest warrant were not formal charges, according to Boulder County District Attorney spokeswoman Carolyn Fench, who said the crimes listed in the warrant are possible charges.

Perhaps the most unexpected was the possible felony murder claim, which means prosecutors may accuse Karr of killing JonBenet during the course of a sexual assault or kidnapping, or alleging he was present while someone else killed the girl.

Felony murder carries the same penalties as first-degree murder: either life in prison without the possibility of parole or the death penalty.

"It's a perfect insurance policy for the prosecution in Colorado," said former Denver prosecutor Craig Silverman. "Even if a jury were to somehow buy that this was an accident, any death during the commission of a kidnapping or sexual assault is first-degree murder regardless."

Felony murder is often described as allowing "vicarious liability" and could relate to Karr's statement to reporters in Thailand on Sunday that he was present when JonBenet died and that her death was an accident. He did not specifically say he killed her.