The so-called President of Ichkeria Abdul-Khalim Sadulayev, who was killed yesterday, was planning a big terrorist attack in the Chechen town of Argun - the same place where he was tracked down and killed, Chechnya’s Prime Minister Ramzan Kadyrov stated. The operation in which Sadulayev was killed was carried out in the Chechen city of Argun. Officers from the Kadyrov special police task force No. 2 and the Argun district police department pinpointed Sadulayev's whereabouts and killed him. 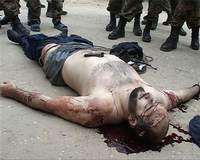 "Investigating officials have arrived at the scene of the operation, people who knew Sadulayev well are being taken there, and procedures to identify the man's body are being carried out. At the same time, the participants in the operation have no doubts about the very fact of Sadulayev's killing," Tagirov said.

Sadulayev was elected so-called President of Ichkeria (the name which terrorists use for Chechnya) in March 2005 when terrorist leader of Chechnya Aslan Maskhadov was killed by the Russian federal forces.

Chechnya’s Prime Minister Ramzan Kadyrov said the hunt for Sadulayev in Argun was held as a part of a large-scale operation searching for terrorist leaders in the region. Pro-Russian Chechen troops joined units of the Federal Security Service for the operation.