An Airbus A321 of Ural Airlines struck a flock of gulls during takeoff from Zhukovsky International Airport near Moscow. The plane was bound for Simferopol. The accident occurred at the moment when the jetliner took off from the runway and began gaining altitude. Many passengers were filming their takeoff. 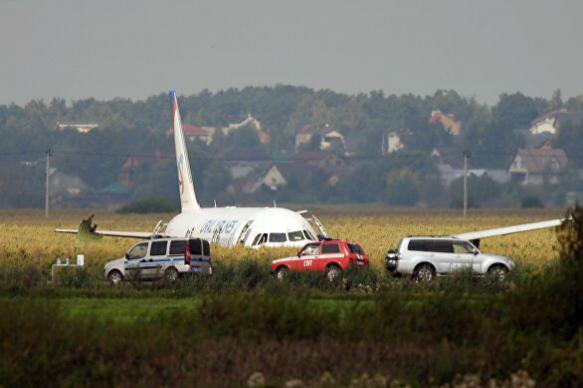 The crew decided to perform an emergency landing. The airplane had 16 tons of fuel in its tanks, but only 500 liters had been used by the moment. The plane landed on its belly in a cornfield as the pilot decided not to extend the landing gear. Luckily, the plane did not explode; no one was killed.

According to most recent reports, 23 people suffered minor injuries during the crash landing. The list includes nine children and a pregnant woman. The youngest of the passengers was only 18 months. Some were diagnosed with brain concussion. Two passengers suffered bone fractures.

A criminal case has been instituted under Part 1 of Article 263 of the Criminal Code of the Russian Federation - "Violation of the rules of the safety of movement and operation of air transport." Officers of the Moscow Interregional Transport Office have collected two flight recorders.

First pilot Damir Yusupov managed to land the aircraft safely on the cornfield. He also supervised the evacuation of the passengers. Yusupov's flight experience counts over 3,000 hours. Damir Yusupov, 41, graduated from the St. Petersburg State University of Civil Aviation and was hired by Ural Airlines soon afterwards. Second pilot Georgy Murzin is 23 years of age, he has 600 flight hours of experience.

Dmitry Peskov, the official representative of the Kremlin administration, told reporters on Aug 15 that the pilots of the A321 aircraft performed indeed a heroic act. The passengers and the crew remained alive, so one should thank pilots for that in the first place, Peskov said.

Bird strikes always lead to serious consequences. The average speed of an aircraft at altitudes below 1,000 meters may reach from 200 to 400 kilometers per hour. This speed makes a bird becomes a bullet that can literally crash the aircraft engine. In 40 percent of cases, birds fly into engines.

Technically, every major airport is supposed to have an ornithological service that conducts observations, registers statistic data, studies migration routes of birds, and carries out activities to scare them away.

Many bloggers wonder how flocks of gulls could find themsevles near the airport. Local residents presume that the birds are attracted to landfills in the area of the Zhukovsky airport.