War in Syria about to end?

Syrian government troops have established full control over eastern Aleppo. Terrorists in their last stronghold, Firdous neighborhood, have been destroyed. 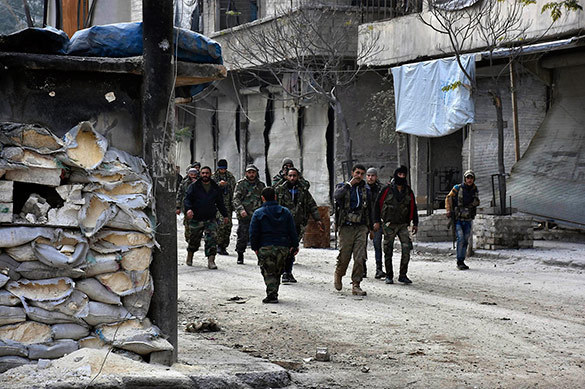 Earlier, it was reported that the Syrian army liberated five neighborhoods in the eastern part of Aleppo. Thus, the Syrian military took control of almost the entire city.

The leader of Al-Jabhat Ash Shamiya, Youssef Fahad Dib, tried to escape from Aleppo as a refugee, but was detained by the Syrian military.

Hundreds of Aleppo residents came out of their shelters to greet the Syrian military men. The people were congratulating each other on the victory, chanting slogans in support of the government troops and Syrian President Bashar al-Assad.

Pravda.Ru asked researcher at the Analytical Center for Military-Political Studies of the Russian Foreign Ministry/MGIMO, Sharbatullo Sodikov, to share his views on the prospect for the war in Syria to finish.

"Does the liberation of Aleppo mean that the final victory in the war in Syria is around the corner?"

"It is too early to speak about the final victory, but we are going through the final stage of the war now. The territories that used to be controlled by ISIL terrorists are shrinking in every direction. In the last two days, more than a thousand militants have voluntarily laid down their arms and took the side of the current government. As for the capture of Palmyra, I think that it was the officers of the Syrian army who were hired by the Islamic State terrorist group. They were cooperating with the terrorists and gave them the coordinates."

"What other territories do they still have under control in Syria?"

"Terrorists arrive at a certain territory on a vehicle. A group of up to ten people control one street for a day or two before they are destroyed. They are suicide terrorists, and they fight till the last drop of blood."