On July 18, a shootout occurred in the city of Alma-Ata, Kazakhstan. The police cordoned off the area. 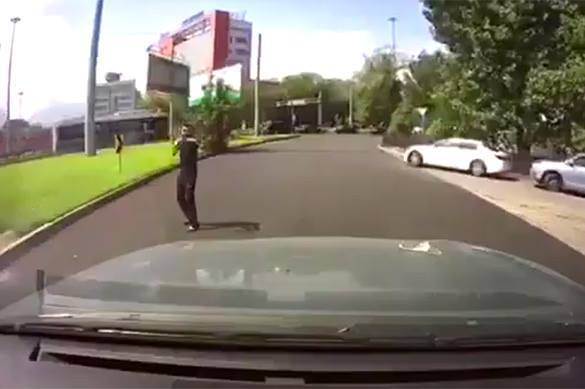 The shootout took place near the Almaly District Department of Internal Affairs in the city center. Several attackers opened fire on police officers, killing three. One of the attackers was arrested. Seven police officers current remain in intensive care units of local hospitals. Two of the victims are said to be law-enforcement officers, the third victims is a civilian.

A counter-terrorist operation and the highest level of terrorist threat were declared in the city. Residents of the city were asked not to leave their homes.

A woman driver accidentally captured one of the terrorists on her dashboard camera. The footage shows a man with a gun running across the road. The woman slowed down and drove the terrorist by saying "Is he nuts or something?"

in early June, a terrorist act took place in Aktoba, Kazakhstan. Terrorists attacked a gun shop and then a military unit. Seven people were killed.