England fans go on rampage in Marseille. Next fight – with Russia

English football fans went on rampage in the center of the French city of Marseille. Violent clashes occurred between the crowd of drunk fans and local residents. About 200 fans began throwing chairs and bottles shouting "ISIS, where are you?" The fight erupted at around midnight on Friday in the Old Port area of the city, TASS reports. 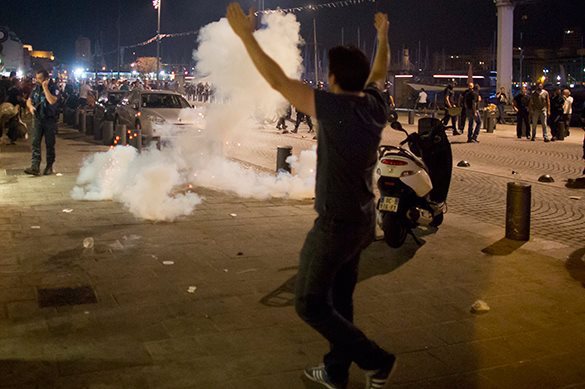 According to the agency, riot police had to use tear gas to disperse the raging England fans. Security forces cordoned off the area, but only a few offenders were arrested, others managed to escape.

According to witnesses, the clashes resumed some time later, and the riot police had to cordon off the area again. Police dogs were involved to neutralize the locals, who wanted to answer the opponents.

On May 30, local media reported that terrorists were planning a series of terrorist attacks during the Euro-2016, in particular, on Saturday's Russia-England game. It was said that information about the possible attack was found on the computer of Abdeslama Salah - the man, who was accused of arranging Paris and Brussels attacks.

The UEFA European Championship 2016 takes place in France from June 10 to July 10. Russia to play vs. England on June 11 in Marseilles. About 150,000 England fans are expected to stay in the city on the day of the match.