Ukrainian partisans lynch those who earned money by killing in Donbass

In Ukraine, veterans of the so-called anti-terrorist operation (ATO) have increasingly been falling victims to unknown individuals, who do not feel any gratitude to them for killing fellow citizens in the Donbass region for money. There is every reason to believe that there are clandestine group of partisans being forced in Ukraine who struggle against the Kiev junta and its henchmen. 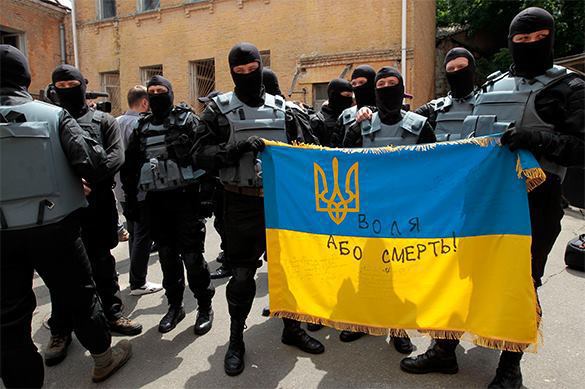 This week, a group of unknown individuals attacked an ATO volunteer in a cafe. Thirty-two-year-old resident of Kiev Sergey Zelensky was looting and robbing in the south-east of Ukraine to make his living. He served at the 128th Brigade of the Ukrainian Armed Forces.

A group of about ten men burst into the cafe and assaulted the killer, having beaten him brutally. The attack lasted for about 30 seconds. Zelensky was hospitalized with multiple fractures and head injuries.

Noteworthy, several police officers could be seen standing outside the cafe during the moment when the attack occurred. However, the officers showed no resistance to the lynching.