Eleven people, including seven police officers, were killed in an explosion that occurred in the streets of Istanbul, Turkey, in the morning of June 7. The terrorists were supposedly targeting the police officers, Istanbul Governor Vasip Sahin told reporters, TASS said. 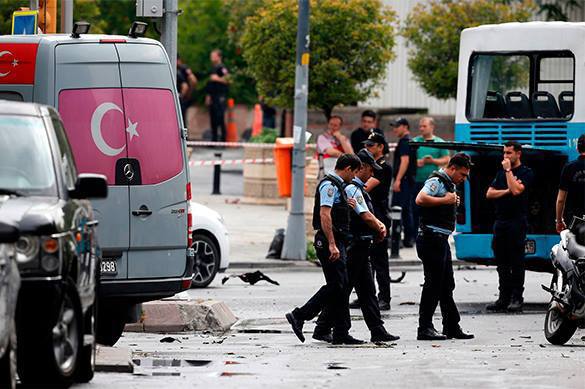 A car bomb blew up at about 08:40 a.m. in Vezneciler neighborhood of Istanbul. Four civilians and seven police officers were killed in the attack. Thirty-six others were injured, three of them remain in critical condition, the official said.

The bomb exploded close to a public transport stop in the European part of the city. According to Turkish media reports, the car exploded just at the moment when the police bus was driving by. Anadolu agency said that after the explosion, shots could be heard.

The police bus overturned as a result of the explosion. The blast damaged houses and cars nearby. No terrorist group has claimed responsibility for the attack yet.

Noteworthy, the Turkish media are prohibited from covering details of terrorist attacks. The footage of the victims and those injured in terrorist acts is prohibited to prevent further crimes and defend the territorial integrity of Turkey, Supreme Council on Television and Radio said in a statement.