A passenger plane of Egyptair Airlines went off radar screens on May 19. The plane is believed to have crashed into the Mediterranean Sea. 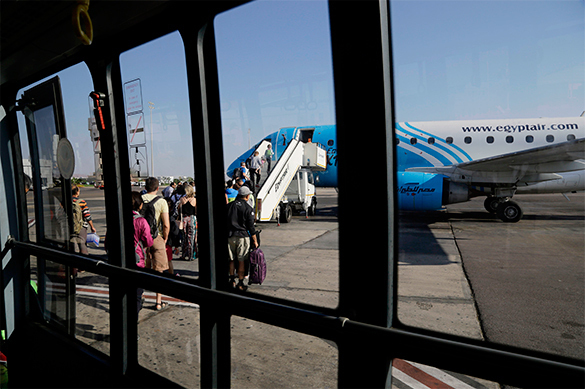 Spokespeople for Egypt's Ministry for Civil Aviation have released an official statement confirming the crash of the A320 airliner. The plane was flying from Paris to Cairo and disappeared while flying about 280 kilometers from the Egyptian coast.

According to various sources, the aircraft departed from the airport Charles de Gaulle at either 23.09 or 3:00 Paris time.

There were 56 passengers (including three children) and ten crew members on board Flight MS804. Their fate remains unknown.

There were citizens and nationals of 12 countries on board the plane: 15 French, 30 Egyptians, a Briton, a Belgian, two Iraqis, one man from Kuwait, Saudi Arabia, Sudan, Chad, Portugal, Algeria, Canada. There were no Russians on board the missing aircraft.

Earlier, it was reported that residents of one of the Greek islands saw a flash in the sky in the morning.

Sources at Egypt's Ministry for Aviation said that the missing airplane had most likely fell apart before falling into the Mediterranean Sea.

Russia grounded all flights to Egypt after the accident on October 31, 2015, when the passenger airline of Russia's Kogalymavia airline was exploded when flying from Sharm El Sheikh to St Petersburg. All 217 passengers and seven crew members were killed in the terrorist attack.